On one particular Motzi Shabbos phone call, Brad informed Betty that he would be traveling to South Florida for Sukkot and wanted to meet her while in town. They ran into challenges when trying to plan their date during Chol Hamoed because none of the local kosher restaurants had sukkahs where they could enjoy a meal. The two were flexible and decided instead to meet for a smoothie. There was neither adequate seating nor a quiet area for conversation at the smoothie place so Brad and Betty spent the next 2 hours sipping on their beverages and talking in Brad’s car. Up to this point, an observer might have thought that everything was going wrong. Yet, it is exactly when things seem to be falling apart that they may actually be falling into place. What was about to happen would demonstrate the perfect chain of events specifically designed for this couple by the “Kosher Choreographer.”
After some flowing conversation, Brad reached back to the seat behind him and brought forth the aravos and hadasim (myrtle and willow branches) he had just purchased at the Judaica store for the holiday. Carefully and consciously, he unwrapped the outer foil layer and then gently peeled open the paper towel which kept the species hydrated. He held them in his hands with such a sense of grace and respect, that it impacted Betty in a way she couldn’t understand and it left a lasting impression. You see, had a secular woman been sitting beside Brad, she may have thought all of this was a bit weird. Had an orthodox woman been in the passenger seat, she may have been bored by this obvious act. These events were specially designed for the two soul mates. 9 months prior to their date, Betty had embarked upon a spiritual journey to increase and raise her level of observance. Unbeknownst to Brad, this seemingly small gesture on his part, had a huge and meaningful impact on Betty. She had never experienced a date like this.
In one of their consequent phone conversations, she revealed to Brad that the image of him with the species played over and over in her mind like a movie. There was something about this that moved her deeply and brought tears to her eyes each time she spoke about it. Brad realized that Betty was a profound and spiritual woman who appreciated and valued him and really “got him.” It soon became clear that their first date was an encounter of two souls and the direct result of Divine Intervention.
Shortly after Brad’s return to Dallas, he and Betty began their lengthy nightly conversations. It was something both looked forward to all day. One hour turned into two, turned into three as children, family, relationships, values, observance and more were shared and explored. It was not long before they recognized they were Bashert and gradually made plans to blend with Betty’s four and Brad’s five children. Less than five months after Brad and his children moved to Miami, the couple married in the romantic gardens of the family home surrounded by their nine children and immediate family. It was a meaningful, joyous, love-filled occasion.
Almost four years later, not a day goes by without Betty and Brad giving thanks to H-shem for the miracles He created to help them find each other and for their connection on that “divine date.” Today, Brad and Betty assert, “We are soul mates and true partners in every sense of the word. We feel blessed for our family and our life together.” 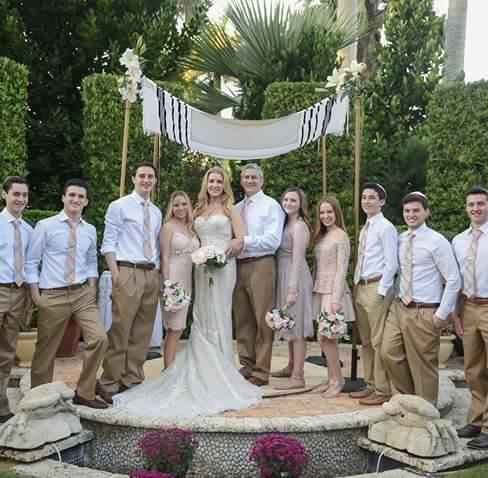